Buy at Amazon or your favorite independent bookstore 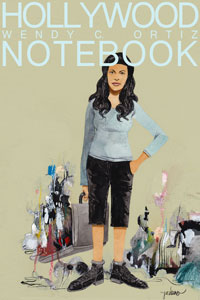 “Young woman moves to the big city to ‘make it’ as an artist — it’s a classic Bildungsroman. Hollywood Notebook’s narrator worries, in these frantic, disparate journal entries, about rent, overdue library books, joblessness, and the lack of cold running tap water…You can hear the growl of the Metro bus on every page, feel the squeak of the Naugahyde chair, and smell the cigarette smoke. Each tenderly wrought detail evokes the crackling sense of wonder we feel as young adults when the world appears pregnant with possibility and dread.” —Lauren Eggert-Crowe, Los Angeles Review of Books

“The entire project becomes nearly reminiscent of the self-musings of Maggie Nelson, if Nelson were consulting astrological charts rather than philosophy…Hollywood Notebook, then, is a sui generis gem, and one to take advantage of immediately. How often can we read a stranger’s journals so guiltlessly, and with such satisfaction? Ortiz inspires it — she’s laid herself bare, and in doing so dug deep in a way that so few memoirs can actually achieve.”—Jeva Lange, Electric Literature

“Expect a fusillade of such so-true-you-could-swoon sentiments in this episodic memoir, in which Ortiz recounts the hazy days of her twenties and early thirties in poetic snapshots. This is as much a bound testament to Ortiz’s talent as it is an ode to the craft of writing itself: while Ortiz drifted in and out of love, of varying degrees of sobriety, and of tiny apartments, what remained constant was Ortiz’s hopeless devotion to transforming her experience into the written word.”—Caroline Goldstein, Bustle

Interview with Sarah Lippmann for Bustle

“Unflinching and stunning, Hollywood Notebook is composed of people and places left behind but not forgotten. ‘I don’t really waltz, I tramp in,’ Wendy C. Ortiz writes. She’s a writer who doesn’t hide, even when a helicopter shines a searchlight through her window as she lies naked in the bath. I revel in her boldness and trust her voice, moving through her past ‘like fire on the move.’”—Chelsea Hodson