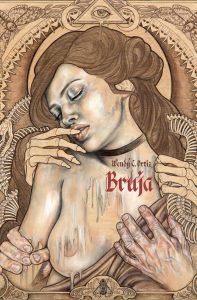 Buy at your favorite independent bookstore or Amazon

“It’s testament to Ortiz’s courage as a memoirist that she’s willing to live for a while on this submarine plane, among the elements that dictate her fate — and to invite her readers along for the show.”—Ellie Robins, Los Angeles Times

“Bruja is a personal history and a travel journal, a book of emotional heft and bizarre incantations, a revelatory experiment and a literary scar produced by life. Ortiz favors short chapters and doesn’t mind letting readers into her mind and life, and the result of that is a book that reinvents what a memoir can be while retaining all the things it is supposed to accomplish as a shared text. This is a smart, strange, wonderfully expressive combination of fact and everything that hovers in the periphery of fact.”—Gabino Iglesias, Vol. 1 Brooklyn

Bruja honored as one “Best Work of Experimental Literature (Film Editing)” in LitHub‘s “If They Gave Oscars to Books, Our 2016 Nominees” (Feb. 2017)

“In the Clutches of the Dreamoir” review by Matt E. Lewis for The Nervous Breakdown

“It the Interior’s Interior”: Vol. 1 Brooklyn interview with Tobias Carroll

Review of Bruja by Olga García Echeverría in La Bloga

“She wields the dusky noir of Phillip Marlowe’s LA as deftly as the grime of Bukowski’s, intermingling them as nature intended, knowing that they don’t exist independently but conjoined, symbiotic. More than that, she channels the kind of quiet, surreal, late-afternoon quality that Didion used to describe bougainvillea-covered bungalows or strip malls baked in the sun…It is in this fashion that Ortiz explores herself and her world: she extends the Lynchian weirdness of Mullholland Drive to cover all aspects of her own life there – every musky pupuseria, immaculately-trimmed rosebush behind white iron bars, or laundromat where John Varvatos and dollar-store fashions are washed side by side.”—Matt E. Lewis, The Nervous Breakdown

“What Ortiz does for the memoir here is comparable to what Flaubert’s Madame Bovary did for modern realist narration or what Capote’s In Cold Blood did for the nonfiction novel. Simply put, Ortiz’s “dreamoir” is a new thing and this book will be the starting point for a movement as well as the go-text for all upcoming memoirs that inhabit the interstitial space between reality, memory, very personal surrealism, and dreams.” —”Best 21 Books of 2016″, [PANK]